A Contractor’s Guide To Government Shutdowns

The continued operation of the U.S. Government depends on an annual cycle of the House, the Senate, and the President agreeing on spending.1 The cycle typically begins in February when the President submits the annual budget request to Congress.2 From there, the House and Senate each work separately to develop their own budget resolutions.3 These resolutions often differ from each other and from the President’s request.4 Then begins the daunting process of attempting to resolve these differences. If the process breaks down and Congress fails to pass a budget, or if the President disapproves the budget passed by Congress, a Government shutdown may occur.

This BRIEFING PAPER discusses the legal principles involved with Federal Government shutdowns and provides federal contractors with suggested strategies for mitigating damages and recovering costs incurred as the result of a shutdown.

________________
*Jerome Gabig, Richard Raleigh, and Christopher Lockwood are shareholders withWilmer & Lee, P.A., practicing in the firm’s Government Contracts Practice Group. Mr. Gabig is an NCMA Fellow, a retired USAF Judge Advocate, and a former CEO of a
technology company, and has served on the Army Science Board. Mr. Raleigh is a member of the American Bar Association House of Delegates, a Past President of the Alabama State Bar, and previously served as a U.S. Army Judge Advocate. 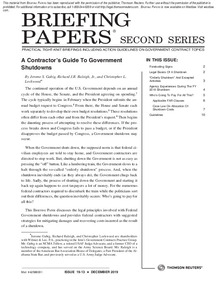 Learn more about the firm
www.wilmerandlee.com